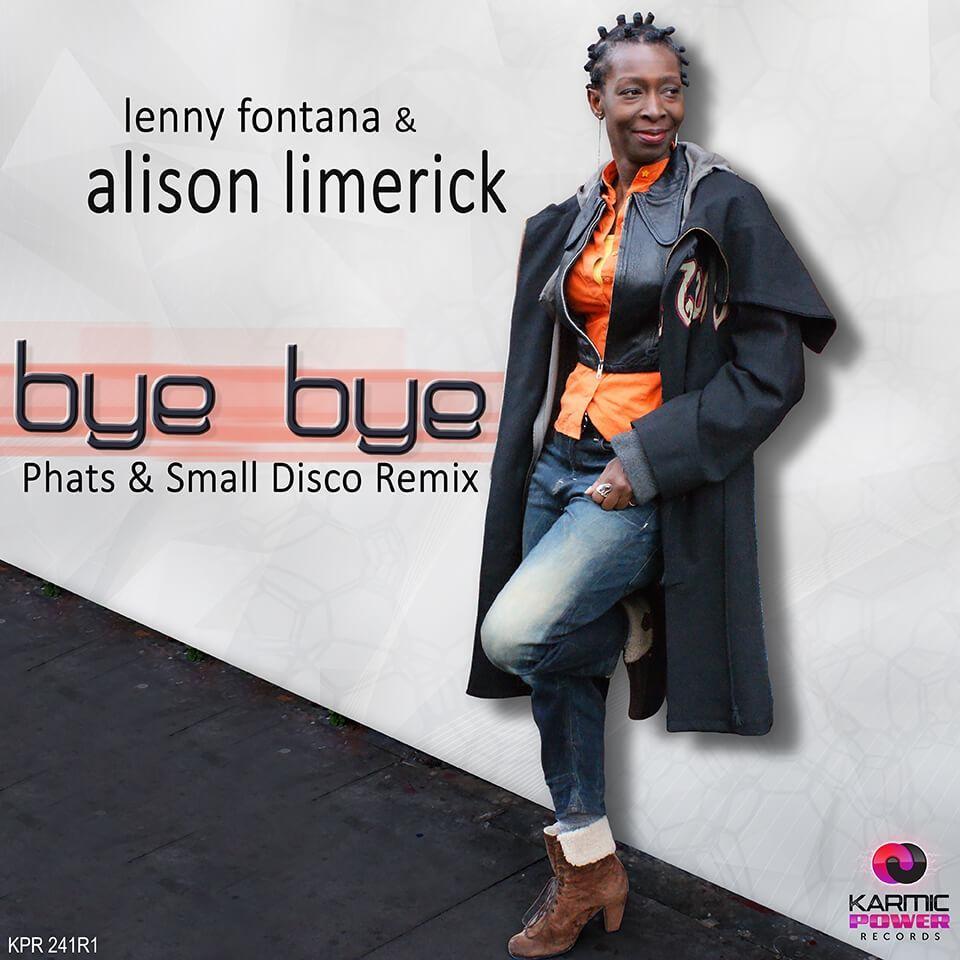 Alison Limerick a true classy singer and a UK Heritage Superstar in dance music; who is world famous for her classic hit single "Where Love Lives" She now delivers the new single "BYE BYE" produced by the heavy hand of New York's DJ Lenny Fontana.

Phats & Small's is called upon to do the honours of remixing the single with their piano disco influenced vibe. They became known worldwide for their hit single "Turn Around" (Hey What's Wrong With You) which has been re-released on Armada Music back in 2016. The classic disco house vibe of their remix makes Alison's lead vocal truly shine. This is just the right sound for those Disco Festivals in the UK and great Saturday night parties. You will find this record being played at all the hot beach parties in Miami, Croatia or Ibiza in the summer of 2018. Your Full Support is highly appreciated on this.

BIOGRAPHY LENNY FONTANA:
Lenny Fontana from New York learned his craft from DJ Frankie Crocker, the program director of WBLS. Inspired by DJ Larry Levan, Fontana went on to play at Studio 54 in the late 80's and other NYC clubs. Through the 1990's he travelled the world and played at many famous nightclubs globally. He was the first US DJ to play at Pacha Ibiza and in Dubai. Lenny had his first successful production in 1992 with Butch Quick's "Higher" (Strictly Rhythm).

In 1999 he had his first crossover hit record, "What You Need" (Defected Records/Ministry Of Sound) with under the name Powerhouse Featuring Duane Harden. This was a Top 10 hit in the UK was performed on the famous TV show Top of the Pops and the Pepsi Chart Show. In 2000 Lenny recorded his hit, "Chocolate Sensation" (FFRR/Warner). Both singles crossed over from the House charts to the Pop charts with the videos on heavy rotation on MTV worldwide. In 2005 Lenny Fontana presents Octah'via (of C+C Music Factory) "The Way"(Defected Records), which became a dance club hit.

After some soul searching, Fontana founded Karmic Power Records in 2013. In 2015 Lenny Fontana & D-Train "Raise Your Hands" (Karmic Power Records) was a huge success as WMC Miami. Including remixes by David Morales and others, it received support from Louie Vega, Tony Humphries and many other DJ's worldwide. At the end of 2015 the record hit the #3 position in The Music Week Club Chart UK, and #14 in the End of the Year Chart. Lenny also produced a successful single for Meli'sa Morgan, "So Good"(Fresh Entertainment/RFC Records). In 2016 and 2017, D-Train's follow-up single "When You Feel What Love Has" (Karmic Power Records) received worldwide attention and hit the #4 position on Music Week Club Chart UK. With over 650 spins a week on daytime radio rotation in the USA, the song hit the #31 position on the Nielsen Billboard Indicator Radio Chart (USA) and the huge urban station WBLS 107.5 FM, Sirius XM Venus, Music Choice and many other FM stations added it to their daytime rotation. Currently, there is a new release slated with the famous UK artist feat. Alison Limerick, called "Bye Bye" (Karmic Power Records).

BIOGRAPHY ALISON LIMERICK:
". . . . full of energy and vitality and when you combine this with her incredible voice you know that this woman is a special talent." Melody Maker

Alison Limerick was born in London and trained as a dancer at the London School of Contemporary Dance. She went on to perform with Ballet Metropolis and MAAS Movers. Although first singing professionally for the London Contemporary Dance Theatre and Phoenix Dance, alison's powerful vocals were soon in demand on commercial sessions. She found herself working with artists and songwriters including The Style Council, Pete Murphy and This Mortal Coil. alison is one of the (uncredited) singers heard performing the closing theme song on each episode of the BBC's Blackadder the Third series.

Session work led to a successful solo recording career that took alison to the forefront of the international dance scene. Signed to Arista Records in 1990, she released her first solo album, And Still I Rise in 1992. Named after one of alison's favourite Maya Angelou poems, the album yielded four singles in addition to the worldwide hit Where Love Lives: Come Back For Real Love - production care of Arthur Baker and Lati Kronlund with extra BVs by Jocelyn Brown and Papa Dee; remixes by Paul Oakenfold/Steve Osborne; Make It On My Own - produced by Steve Anderson; remixes by Tony Humphreys and Todd Terry Getting It Right - co-written with Steve Anderson who produced; Frankie Foncett and Masters At Work on remix duties Hear My Call, most notably mixed by Driza Bone (Billy April/Vincent Garcia).

The 2nd album With A Twist produced two singles - Time Of Our Lives and Love Come Down, the latter a cover of an Evelyn Champagne King tune, both tracks gaining alison a place in the UK national top 40. Although Frankie Knuckles claimed the lion's share of production, the album also featured contributions from Dave Morales, The Beloved and the John Waddell/Tim Bran partnership. In 1996 Arista released Alison Limerick: Club Classics, a remix album. From this release Where Love Lives again topped the dance charts with Make It On My Own following.

For the first time Where Love Lives was released in America and reached number 4 in the Billboard Hot Dance 100 Chart. To top off the year alison was nominated for a MOBO award. The album Spirit Rising, released in 1998, featured the single Put Your Faith In Me (released in '97, produced by Living Joy's Visnadi Brothers) which became a top 5 dance track. A second single Let's Hold On (to Love) and an Italian release of Never Knew also came from the album. 'Where Love Lives, a track so mammoth, that even the term classic seems inappropriate.

' TOP There can be no doubt that it was the 1991 release of Where Love Lives - voted the 'Greatest Dance Record Of All Time' in Mixmag - that catapulted alison onto the dance scene. A huge dance hit, not only in the UK but across the world, that has so far been included on over 50 compilations world-wide, including all the main players' 'Classics' collections (Cream, Pasha, Ministry Of Sound, Dave Pearce' 40 Classic Dance Anthems and the Pete Tong Collection). Time-Out voted it one of the 20 Best House Tracks Ever. DJ Magazine described it as a game-changer, "A seminal track that altered dance forever". The song must also be a contender for the most remixed track in dance history and includes all-time classic mixes by such luminaries as Frankie Knuckles and David Morales, whose Classic Mix shines brightest in the minds of many fans. Writing/singing collaborations include Love Will Keep Us Together with the James Taylor Quartet for their album In The Hand Of The Inevitable, tracks for each of the five Vibrophonic albums, two tracks with Japanese band Key of Life for their self-titled album (released on Victor), Workin' On It on Angel Reef, This Girl on Identity Records, Let Me Lead You To Heaven on Rebirth and In The Blood a song co-written with Xpress 2 released on the Skint Label.

The versatile vocalist has worked with other producers including Arthur Baker, Joe T Vanelli and Lati Kronlund. Co-writing the cuts on which she sang, alison featured on the British r'n'b album Colour Of My Soul by Full Flava, on IKON's self-titled debut album and on Let Me Lead You To Heaven, by Italian production team And If. Along with the award winning composer David Mitcham, alison co-wrote Any Kind Of Light, the closing theme of Richard Burridge's 2003 British movie Collusion, starring Imogen Stubbs and Leslie Philips; a film in which she also appeared as the jazz singer. No Other love (on Chocolate Boy Records) is one of the few tracks Ms Limerick did not co-write. Remix credits go to a host of names including Frankie Knuckle/David Morales, Paul Oakenfold/Steve Osborne, Tony Humphreys, Todd Terry, Frankie Foncett, Driza Bone and Masters At Work, who helped to propel Ms Limerick's early career forward. More recently Dancing Divas, Northstarz, Open Air, Chocolate Puma, Manuel Tur, Seamus Haji, Pound Boys, Kraak & Smaak and Steve Angello have taken turns in the remix studio, ensuring that alison Limerick's presence continues to be felt on the dance floor.

No stranger to the live arena, alison has worked on stage with pop legend George Michael and jazz hero Courtney Pine. In the 90s she gigged with both Vibraphonic and the James Taylor Quartet, as well as touring her own band. In 2001 alison joined Lamont Dozier on stage at the Royal Festival Hall for "The Song's The Thing", a celebration of Motown music. The Telegraph enthused, "Passion and charisma arrived in the form of shaven-headed British soulstress alison Limerick and a breathlessly exhilarating Reach Out (I'll Be There)".

In 2016 alison began touring with the Brooklyn Funk Essentials, a live project that has her working once more with Lati Kronlund the writer and producer of Where Love Lives. Closer to home she can be heard singing soulful jazz with Algorisms or performing with Eat Logic, an edgy Jazztronica/Futurejazz collective . . . . and she can still be heard, live and loud, at house music events around the world, as evidenced by her sell-out appearances with the Carl Cox 'Mobile Disco' Tour in Australia at the end of 2016. 2017 will see Ms Limerick back on the road with the Brooklyn Funk Essentials, with whom she has been recording, likewise Eat Logic's album should be ready for release later this year and will be accompanied by gigs with the band. This autumn Algorisms will release their seminal interpretation of Autumn Leaves. In March alison will appear in the BBC2 programme "Geri's 90s", reminiscing with others about that heady decade.